The Prisoner’s (other) Dilemma 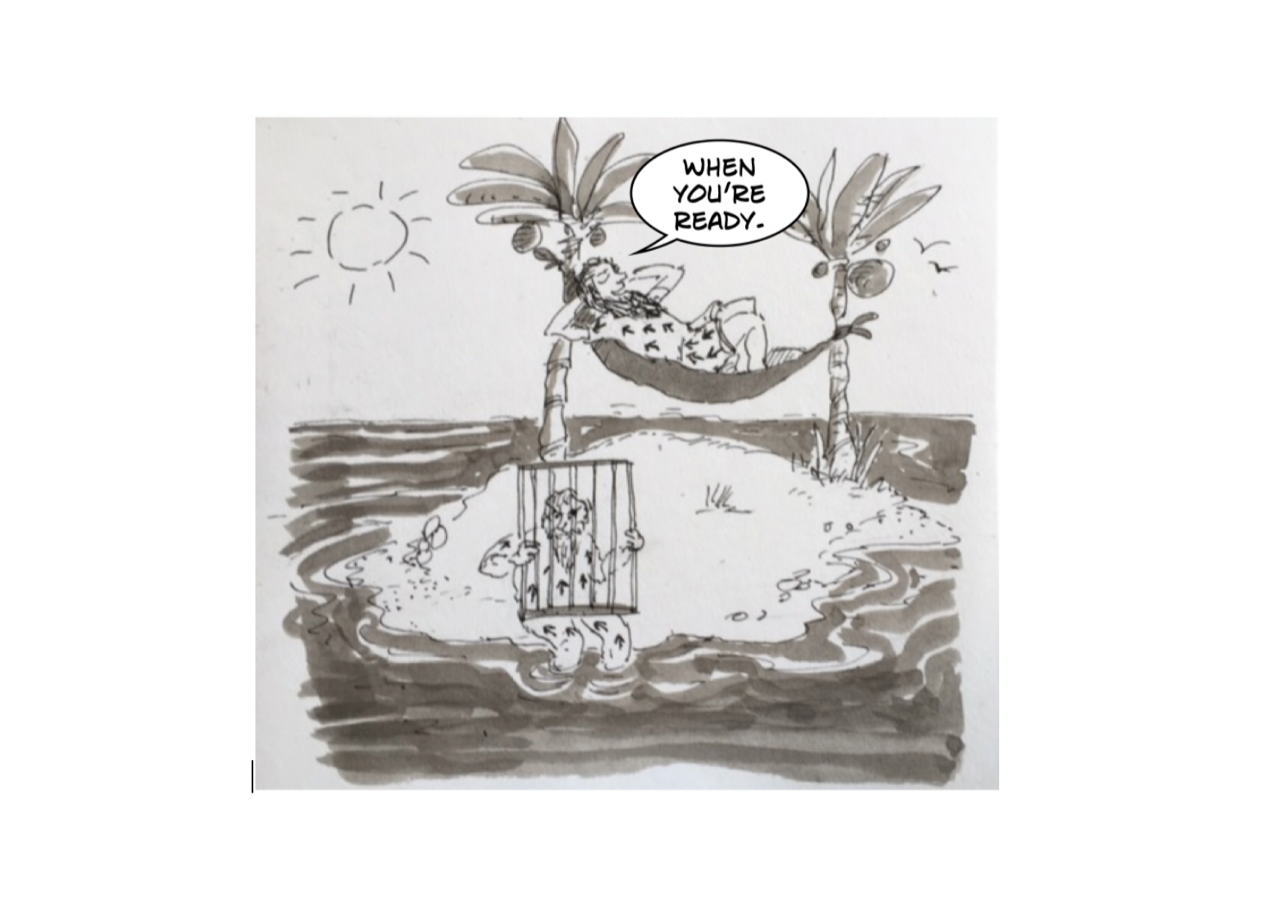 The Prisoner’s Dilemma is a famous thought experiment from Game Theory.  Here David Presswell wonders if there might be another ‘Prisoner’s Dilemma’ – the reluctance we can feel to let go of our own prison bars.

The cartoon is absurd.  Two prisoners on an idyllic tropical island, one lazing happily in a hammock, the second still clasping hold of their prison bars.  Why would anyone possibly choose to do that when they’ve already escaped?  Yet I came across situations analogous to this so regularly in my coaching work I eventually asked a cartoonist friend of mine, Diana Gold, to draw this cartoon for me.  I’ve used it regularly since.

When I was in my early teens my younger sister underwent an operation on her foot.  To protect the delicate surgery her foot was placed in a cast – which was duly ‘decorated’ with messages by me and all her friends.  As she grew more confident she started to make her way around on crutches.  Eventually it was time for her to go back to the hospital and have the cast cut away, except that the date fell within the Easter break.  Then there was a mix-up over appointments.

As the days passed she started to get pains in her foot and the cast, which had once afforded such protection, started to cramp her.  It came as huge relief when she was eventually able to have the cast removed so that her foot could flex and gradually strengthen.

Now imagine for a moment you are the seated prisoner in the cartoon.  For years you have held onto those bars looking longingly at the world beyond.  They represented your only access to the world outside and the better life it promised.  Holding onto them became a habit as well as a reassurance that one day you might walk free.  To loosen your grip on them might even have felt as though you were letting go of that precious possibility.

Now let’s translate this to a more common example.  Imagine you are someone whose recipe for success early in life was, say, self-sufficiency.  You decided, for whatever reason, that life would go better for you if you did everything yourself, because asking for support from others carried the risk of being let down by those around you at the time. Through dint of talent, hard work and some luck you made your way into leadership positions where you start to enjoy success and status only dreamed of when you were young.

Your standards are exacting and you do lots right, but for some reason others seem reluctant to follow.  Your team continually fails to step up, leaving you time and again to pick up the pieces.  Maybe you try to offer even more precise details of what it is you are looking for, or seek to set them a yet finer example of exactly what they should be doing, but somehow this never quite translates into them taking ownership.  You start to resent their dependency.

The situation is confusing for them too: when asked, they find it hard to put their finger on anything you, as their leader, are doing wrong.  They talk vaguely about wanting more space and responsibility, but then acknowledge this probably wouldn’t work anyway because they sense you could their job better than they could.  They feel as frustrated and stuck as you do.

Until you realise that this is how you too would also feel if you worked for the ’perfect’ boss, one who had no need for anything from their team because they could, and often would, do it all better themselves.  A boss whose emotional self-sufficiency subtly but powerfully communicated that team members were only ever going to be of transactional use to them.

In that moment of realisation you become the seated prisoner on the beach.  The very thing you have held onto all these years, your recipe for professional advancement, now limits your ability to enjoy the fruits of that success.

If this resonates, then you’ll understand that just being told to ‘stop it’ (the equivalent of telling the prisoner to ‘just put down those bars’) rarely works.  Even if you knew how to do that you are likely to feel reflexively anxious in doing so.  It simply wouldn’t feel safe.

This is complicated and delicate territory, and it’s possible you may benefit from professional support to help you through the adjustment, but here are three approaches you might like to try.

Intellectual.  The first is an intellectual recognition, one that this article may already have started to provoke, that the protection you grasp may well have been a necessity at an earlier, less resourced time in your life, but that this is no longer the case.  In today’s very different circumstances it represents a choice you are making, however unwittingly.  It is therefore also possible for you to choose alternative approach.

Physiological.  The second is absurdly mundane: it is the deliberate, sensory experience of being supported by the ground and by furniture such as chairs and beds.  This may sound ridiculous; surely everyone does this naturally?  Except that so many of us don’t, and we are only likely to notice the phenomenon of others failing to rely on the physical support around them when we watch the enormous energy a novice swimmer can expend in the frenzied attempt to stay afloat.  If only they trusted the water to support them they might find they could glide.

Emotional.  If at this moment you feel the temptation to censure or berate yourself, your grip on those bars will tighten.  We each need to learn to forgive ourselves, and to accept that it was only by acting as we did in the past that we’re now in the position, should we choose, to let go.  Starting with this self-appreciation you might like to adopt what is sometimes called ‘an attitude of gratitude’.  It is one of the most powerful shifts any of us can make.  It is fundamental in recognising that, however competent, none of us is truly self-sufficient.  Virtually every aspect of our life, from our helplessness as babies, to the safety of food we eat or the transport in which we travel, to the films we watch, is thanks to others.  Gratitude celebrates the truth of our inter-dependence.

To return to the self-sufficient leader mentioned earlier, it is only when he or she finds the courage to be vulnerable, to admit their own needs and to trust others to meet them, that they can let go of adolescent fantasies of perfection or self-sufficiency.  For any of us, it is only when we can let go of outgrown protections that we are free to embrace life as it is now.  “When you’re ready.”

MMM for moving on

There comes a point in most careers when it’s time for a change.  But the longer you’ve left it,…

What first impressions do you create?

My youngest is looking forward to starting university in a couple of weeks.  He is the only one from…